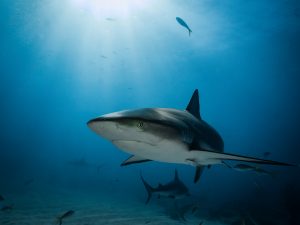 Monday, July 24, marked the beginning of Shark Week 2022 on the Discovery Channel. For those unaware, Shark Week has occurred each year since 1988 and includes a week’s worth of shark-related programming. With much attention this week on sharks, state lawmakers have introduced myriad legislation pertaining to sharks this year.

The California Assembly passed AB-2109 in March 2022 related to attracting white sharks. Expressly, the bill would prohibit using any bait, lure, or chum to attract any white shark and the placing of any shark bait, shark lure, or shark chum in the water within one nautical mile of any shoreline, pier, or jetty when a white shark is visible or known to be present in the area. The bill defines “shark bait, shark lure, or shark chum” as any product/device used to attract sharks by taste, smell, or sight.

The bill is currently awaiting consideration in the Senate.

The Georgia state House passed HR 822 in March of 2022. The resolution, which passed unanimously, states the House’s opposition to the practice of shark finning and support for a requirement for shark fin importers into the U.S. to certify that such fins were harvested in a way equal to or more conservative than the guidelines required by the United States government. The resolution further notes that saltwater recreational fishing generates $343.7 million and 3,811 jobs for Georgia annually, and sharks are identified as a key species group. The resolution also states that Georgia is a port of entry for shark fins and shark fin products from other countries that permit shark finning.

A few bills in Hawaii related to sharks were introduced in 2021 and carried over to the 2022 session. SB 578 would prohibit commercial shark tour operations from operating without a permit and require the department of land and natural resources to institute rules regulating commercial shark tours. The bill notes commercial shark boat tours started in the state about twenty years ago. However, the industry remains unregulated, and safety measures vary between operators.

Another bill, SB 504, would prohibit anyone from knowingly capturing or entangling any shark, alive or dead, or killing any shark within state marine waters. Violations would be $500 for a first offense, $2,000 for a second offense, and $10,000 for a third or subsequent offense.

Sharks are even on the mind of U.S. House lawmakers. In February, the House passed H.R. 4521, the United States Innovation and Competition Act of 2021 (USICA), a broad package designed to increase the country’s international trade competitiveness. Among numerous other provisions, the measure would prohibit the possession, purchase, or sale of shark fins and tails and products containing them, with some exceptions such as for research or noncommercial subsistence purposes under state or territorial law. The Commerce Department would enforce the prohibition through civil penalties of as much as $100,000 per violation.

Because of differences between the House and the Senate’s version (S. 1260), the two chambers have been negotiating a compromise bill in a conference committee. Nevertheless, as of late July, a bill text that Republicans and Democrats in the House and Senate can agree upon for final passage remains fleeting.

The #Pennsylvania Senate on Tuesday approved two procedural measures needed to stage an impeachment trial for #Philadelphia District Attorney Larry Krasner, the latest step in an unprecedented effort to remove the city’s prosecutor from office.

Members of the Democratic National Committee's Rules and Bylaws Committee are exploring scenarios that could move New Hampshire or Nevada into the leadoff spot and bring a new state such as Michigan or Minnesota into the early voting window.

#InternSpotlight: Meet DMGS intern, Robert Harvey! Robert is a senior at West Chester University, majoring in Political Science, and has been a a wonderful member of our team. Robert has worked on local political campaigns and aspires to attend law school.

#NEW: In 2022, there has been a sizable amount of legislative activity surrounding state #MinimumWages across the country, as well as recent ballot initiatives on the issue.