As we get down to the final push to Election Day, today’s #7Races7Days takes us to North Dakota’s Senate race.

Of all the Republican states currently represented by a Democrat, North Dakota could be considered the most solidly Republican, and the greatest challenge for Democrats in 2018. 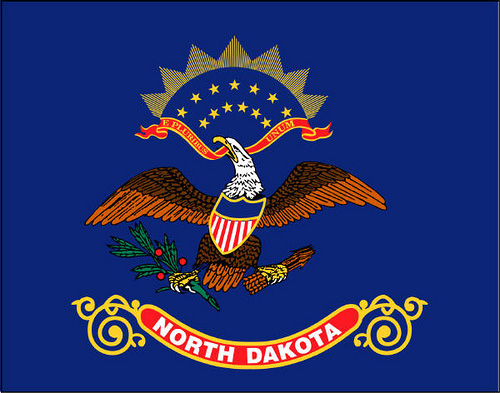 Aside from Heitkamp’s razor-thin margin in 2012, Democrats have struggled win statewide elections, and the state legislature is solidly Republican, both in the upper and lower chambers.

The state has not given its electoral votes to a Democratic ticket since LBJ & Hubert Humphrey in  1964.  In 2016, President Trump won North Dakota with more than 60% of the vote, and its at-large Congressman, Kevin Cramer, won re-election with nearly 70%.

As of polling in September of 2018, President Trump’s approval rating remains above water here, helping to alleviate some of the concerns regarding the national political climate. 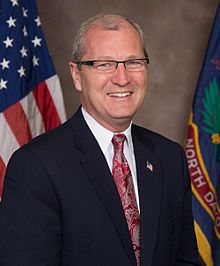 Prior to his service in Congress, Cramer was appointed and elected to a number of state board and commissions, including time spent as the State Tourism Director, Economic Development Director, a member of the Public Service Commission, and Chairman of the North Dakota Republican Party.

Cramer has racked up a solidly conservative voting record while serving in Congress, and his constituents have rewarded him with comfortable re-election bids.

Senator Heidi Heitkamp (D) – Winning election by a narrow margin of fewer than 3,000 votes, or less than 1% of all ballots cast, Heidi Heitkamp has served in the United States Senate since 2012. 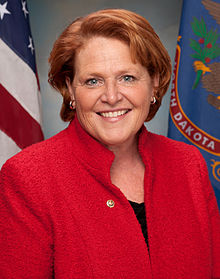 Prior to her time in the Senate, Heiktamp served for two terms as North Dakota Attorney General and State Tax Commissioner.  She also made an unsuccessful run for Governor in 2000, winning 45% of the vote.

During her time in the Senate, Heitkamp has tried to cast herself as a moderate Democrat voting with President Trump 54% of the time, according to FiveThirtyEight’s analysis.

In a state President Trump won by 35 points, it should come as no surprise that an incumbent Democratic Senator would find themselves in some electoral trouble headed into Election Day.

Congressman Cramer has done his best to make the race a referendum on President Trump and his policies, attempting to tap into the energy and enthusiasm Republican voters showed for Trump in 2016.

He has emphasized his personal ties to the President, who made a strong endorsement of Cramer this year, after previously having relatively nice things to say about Heitkamp.

For her part, Senator Heitkamp has focused on areas of agreement with the President, citing her willingness to work with Republicans to advance many of his agenda items.  She has also tried to make the race about state-specific issues that are most important to North Dakotans.

One area of potential divergence between the two candidates is related to the Trump administration’s trade policies.  Heitkamp has made the case that the President’s trade war with China has an outsized impact on North Dakota farmers, particularly those who produce soybeans.  Cramer has contended that in the long-term, these policies will benefit all Americans, including his constituents.

Heitkamp has struggled to convince North Dakota Republicans that she has worked closely enough with the President to earn re-election, and her greatest obstacle in that effort appears to be her vote against the confirmation of now-Supreme Court Justice Brett Kavanaugh.

While she did see a major bump in her fundraising efforts after she refused to vote to confirm Trump’s pick for the Supreme Court seat vacated by Justice Kennedy, this also coincides with her latest drop in all available polling data.

While this race was rated by major organizations as a “Toss Up” as recently as early October, the conventional wisdom as solidified around a Lean or even Likely Republican victory on Election Day.

This will be an interesting election to watch to determine if the Trump voter, unlike the Obama voter in many cases, will turn out and cast their vote for his preferred candidate when he himself is not on the ballot.